Album Review: The Light Within by Juliet Lyons 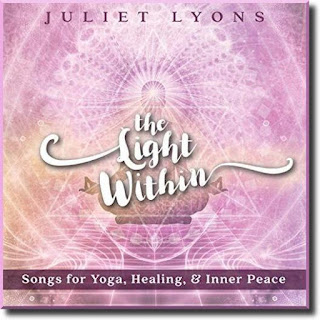 Juliet Lyons is an accomplished singer, songwriter and composer for film and television, who's lent her vocals to various trailers as well as trance-dance and relaxation music. On her latest album, The Light Within (subtitled Songs for Yoga, Healing & Inner Peace) she serves up a soothingly soulful blend of ethereal vocals and lush instrumentation bathed in an Eastern mystique, for an overall vibe that could be described as a Buddha Bar meets healing spa soundscape.

Comprised of ten compositions all written and produced by Juliet Lyons (with “Eternal Now” co-written by Doug Lyons) The Light Within also enlists the talents of several notable guest musicians, including Ricky Kej, Vanil Vegas, Ron Korb and others. Both contemporary and world concepts beautifully collide on these pristine arrangements, which variably feature everything from keyboards and guitars to Native flute, cello, santoor, tabla drums, sacred chants, English-sung melodies and harmonious vocal layers.

While I expected this album to be a pleasant listen, I was in fact quite surprised by how wonderful it truly turned out to be, with its flawless interweaving of warmly engaging melodies, subtle ambient textures and acoustic world elements. And although calming in essence, the music also seemingly embodies a playful oceanic spirit that's evocative of basking in the sun, the sand and the sea.

One of my favorite pieces is “Flow”, on which Juliet Lyons’ wordless vocals softly soar among a silky sound palette of gentle sitar and chilled groove that brings-to-mind a room filled with incense smoke. Also noteworthy is the sensual “Calm”, an ultra-downtempo piece with a dimly-lit atmosphere that employs English lyrics and electric guitar. Additionally, the title piece “The Light Within” is a gorgeous instrumental that delightfully recalls some of Amethystium’s music.

Juliet Lyons’ breathy and sensuous singing style can be somewhat likened to Donna De Lory's, albeit airier, while the mood and instrumentation of several arrangements bears some reminiscence to Paul Avgerinos’ equally outstanding Bhakti album. Additionally, fans of Deva Premal and White Sun might want to check out this album as well.

Though subtitled Songs for Yoga, Healing & Inner Peace, I’ve found myself playing this in the car a lot lately, so perhaps one could tag “and reducing stress while driving” onto that description as well.

A top-notch production sure to have much cross-genre appeal, The Light Within illuminates the listening space and seemingly infuses it with a sense of solace. Though I have much reluctance towards the “new age” label, nevertheless, since that’s the category under which music like this gets filed, with that in mind The Light Within is arguably one of the year’s finest albums in that realm, and sits among my current favorite vocal-centric albums! ~Candice Michelle


For more information please visit the artist's website. This album is also available on Amazon and other retail and streaming platforms.