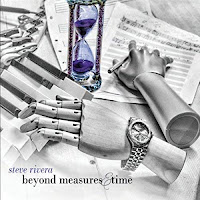 Beyond Measures & Time is the follow-up album to pianist and composer Steve Rivera’s critically-acclaimed debut release entitled Dividing the Darkness. Whereas his prior album featured piano ensemble pieces that were variably accompanied by strings, horns and gentle percussion, Beyond Measures & Time is comprised entirely of eleven contemplatively engaging solo piano compositions, of which only further highlights the immense beauty of Steve’s signature compositional style. I’m also quite fond of the album’s captivating artwork with its slightly steampunk edge, which seems slightly out-of-the-box – yet very fitting – for the album’s overall concept.

Fittingly introducing this album is the gently contemplative “Suspended Dream”, which seemingly conveys a feeling of gradually waking up to sense the warm glow of a morning sunlight. One of my favorite pieces herein is the classical-accented second track “Passing Shadows”, which opens with softly-twirling figures in the higher register that eventually give way to a somewhat brighter yet contemplative melody, before eventually reverting to the composition’s initial motif. My absolute favorite piece however is the nocturnal and shadowy ninth track “Dark Tides”, which aptly conveys an overall darker undercurrent. Seemingly flowing along in a continuum with no defined beginning or end, this subtle piece dreamily drifts along like a boat sailing the waters, as it effectively alludes to both literal and metaphorical interpretations of ‘dark tides’.

Whereas many piano players who market their music as ‘new age’ will often tend to avoid touching on darker moods and emotions, Steve Rivera’s tenderly introspective compositions perfectly elicit both light and shadowy atmospheres with a command of dynamics that is rarely heard. And while Beyond Measures & Time frequently touches on more sensitive emotions throughout – both musically and thematically – ultimately, it is an album which conveys a satisfying sense of hope, comfort and fortitude! ~Candice Michelle