Spotlight: One Drop Became An Ocean by Charles Denler 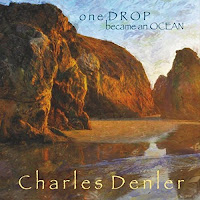 Charles Denler is a Colorado-based pianist and composer with numerous film and television scores and thousands of concert performances to his credit. The follow-up to his widely-acclaimed Moment of Dawn album, One Drop Became An Ocean is a sublimely elegant collection of fourteen compositions spanning thirty-six minutes, which were recorded with the City of Prague Philharmonic Orchestra. Described as “a water suite for piano and chamber orchestra”, the album was inspired by Denler having spent most of his life living near water, and effectively conveys the scenic beauty of rivers, springs, fountains, oceans and rain with a seemingly poetic tone.

Among many things that I immensely appreciate about this album, as with others that take its approach, is the accompaniment of live orchestration as opposed to the artist using synthesizers to mimic classical instruments. Alternately shifting from boldly cinematic and sweeping to minimal chamber passages throughout, Denler creates many aural contrasts, as he perfectly illustrates the water element in its full capacity ranging from dramatic power to the deepest of calm.

Some highlights include “Dreaming Oceans”, a piece that aptly illustrates a tranquil sea after dark, as it employs minimal nuances and plenty of breathing room between the echoing resonance of each piano note. Many of the album’s subtler pieces follow in this vein and are typically among my favorites. The title track, “One Drop Became An Ocean”, imparts a rolling undercurrent and drifty piano notes in tandem with softly swaying strings. “In the Shadow of Angels” ensues with minimal piano, brushes of chimes and a suspension of strings that eventually erupt into powerful orchestration and celestial choirs, as it seemingly illustrates that of an undersea kingdom teaming with life. I’m also particularly fond of “Whispering Sea”, a most haunting passage with a repeating piano motif throughout, which exudes an elemental sensuality veiled in an atmosphere of secrecy. Another favorite is “Ice Crystals”, a contemplative number which effectively reminds us that ice and snow are also water, as it seemingly paints a frozen landscape that’s beautifully expressed by crystalline piano textures. “The Seventh Wave” is a gloriously cinematic closer that effectively illustrates an oceanic expanse as viewed from above, with the sight of dolphins riding on waves amidst its great blue majesty.

A heartfelt ode to the aquatic realm, hearing this album often reminded me of being in a dome theatre and experiencing the adventure unfolding all around me. Likely to appeal to many fans of new age, neoclassical and film score music, One Drop Became An Ocean is simply a masterful work of prepossessing elegance! ~Candice Michelle

For more information please visit the artist's website. This album can also be purchased on Amazon, iTunes, CD Baby and Google Play.

This review was originally published on Journeyscapes Radio on 08/01/17.