Spotlight: All About Love by Ban Brothers 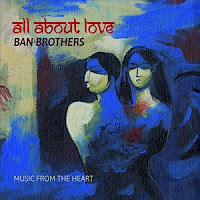 “Bitee Huyee” is an excellent opening piece and likewise one of my favorites on the album, featuring the caressing vocals of Prajoth amongst a lively yet smooth arrangement of keyboards and percussion. Conveying an uplifting mood wrapped in a nocturnal mystique, one might possibly imagine having entered a majestic Indian palace filled with sweet aromas and sumptuous décor. The female vocals of Supriya take the lead on the next piece, “Panchhee Banke”, which effectively recalls an Indian music video depicting an entourage of women dancing in a scenic outdoor setting. In a somewhat unique twist, rhythmic guitar adds a slick western touch to the composition’s traditional blend of mandolin, bamboo flutes, tablas, drums and violins. One of the most intriguing pieces on the album is “Aaj Tum Mere”, which initially opens with birdsong followed by Prajoth once again on vocals. Characterized by a catchy Hindi-pop chorus accompanied by a saloon-style melody and rhythm, this cleverly assembled piece seemingly reminds me of an old Western movie that’s been reimagined in the East! Prajoth also sings “Dil Se Dil”, another nostalgic number that effectively transports the listener several decades back in time, as additional saxophone and acoustic guitar lightly season the composition with jazz and Mediterranean flavors. Wrapping up the album is the infectiously light-hearted, “Hum Se Zamaanaa”, once again showcasing Prajoth on vocals. Notably heavier on the electronic elements, the composition effectively conveys the notion of a Bollywood disco full of beaming techno lights.

Straight from the heart of India, All About Love perfectly illustrates authentic world fusion, seemingly bringing the essence of its homeland into the space of the listener. While perhaps not particularly distinguishable from most other Bollywood music I’ve heard, the compositions themselves are thoroughly enjoyable and always keep the listener moving. Likewise, I really appreciated the warmly innocent, unassuming and down-to-earth vibe of this album, and would especially recommend it to other Bollywood fans! ~Candice Michelle