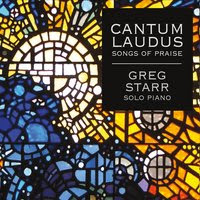 Cantum Laudus (subtitled Songs of Praise) is a collection of fourteen timeless hymns dating back to the middle-ages by pianist-composer Greg Starr. Released on Quiet Rain Music, these inspirational passages are intended to sooth, relax and bring comfort to one’s spirit. Rendered entirely on solo piano, roughly half of the compositions date back to the 1800s, with the earliest piece in the collection dating all the way back to circa 530-598 in Ireland.

The album opens with a solo piano rendition of an English folk song from the 1600’s titled “Royal Oak (All Things Bright and Beautiful)”. Led by a flowing and radiant melody, the piece conveys the warmth and optimism of a clear-blue day, as the sun’s rays reflect upon a pastoral landscape. It’s one in a handful of more celebratory and lively pieces on the album, which are interspersed with more lulling and slower-placed numbers such as “Duke Street”, “Nicaea” and “The Call”. Also included on the album is the widely popular “Jesus Loves Me”, a piece that was originally written in 1861. Here Greg lends a waltzing, almost bluesy touch to this classic hymn, which has long brought much peace and comfort to many children and churchgoers for more than a century-and-a-half. One of my favorite hymns on the album is “Nettleton (Come Thou Fount)”, which dates back to 1825. Initially opening with ringing droplets in high register notes, the composition soon gives way to a gentle and inspirational melody that brings images to mind of a rural countryside. “Bunessan (Morning Has Broken)” is another one of my favorites – a traditional Gaelic melody that was first published in Lachlan Macbean’s “Songs and Hymns of the Gael” in 1888. Intervals of suspended notes help to carefully move the composition along, as its lower register keys exude a definitively calming mood. However, I ultimately found the album’s pinnacle moment on the second-to-last track, which is aptly titled “Wondrous Love (What Wondrous Love Is This)”. This heavenly hymn bodes a majestic yet perfectly understated quality, seeming to unfold in slow motion like that of a delicate flower blooming. Originally collected by W. Walker and published in “Southern Harmony” in 1835, the author of this beautifully mysterious composition serendipitously remains unknown.

While listening to this album it’s easy to imagine one playing these songs on the stage of an old stained-glass chapel, with Greg’s piano exuding a rich and lovely tone throughout its elegant passages. Sure to inspire many listeners with peace, comfort, joy and hope, Cantum Laudus is especially recommended for those who enjoy both soothing solo piano and sacred instrumental music. ~Candice Michelle 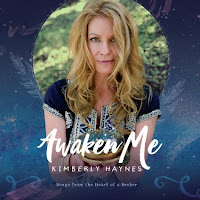 Kimberly Haynes is a singer and songwriter whose debut album, Awaken Me (subtitled Songs from the Heart of a Seeker), invites the listener on a soulful journey of discovering the sacred space within and creating a conscious connection with spirit. Co-produced by recording artist and multi-instrumentalist, David Vito Gregoli, the talented virtuoso plays many instruments on this album – including acoustic and electric guitars, South American charango, bass, mandolin, sitar, banjo, piano, synthesizer, udu, drums, percussion, bells, Native American and world flutes, Gopichand and kalimba. An impressive line-up of contributing artists also includes pianist Peter Kater, vocalists Tina Malia and Aeone, Native American flute player Al Jewer, accordionist Andy Mitran and percussionist Byron Metcalf among a handful of others – who additionally lend instruments such as violin, tabla, dulcimer, didgeridoo and hang-drum. Kimberly provides both lead and backing vocals on the album’s eleven compositions – drawing much of her singing inspiration from the likes of Joni Mitchell, Shawn Colvin, Alison Krauss and Sarah McLachlan.

The title track opens with the harmonizing sounds of a singing bowl and chimes, followed by Kimberly softly singing an ethereal “Om” mantra. Serving up a seamless fusion of east-meets-west, the composition leads into a repeated phrase of “awaken me” amidst relaxing guitar and ethnic percussion. The earthy and grounding nature of this piece continues on “The Dream” – another lovely number that begins with breezy celestial tones – before leading out into a contemporary acoustic arrangement entwined with eastern percussive elements. Here Kimberly sings a soulful melody accompanied by guitar, shakers, string instruments and additional vocal features. Another one of my favorites is “Great Divide”; this piece initially begins with acoustic guitar and native flutes, which are soon followed by our lead songstress who is eventually joined by harmonious backing vocals. Celebratory and soothing, it particularly reminds me of a song one might perform with friends while gathering around a campfire under a starlit sky. The mesmerizing “Do I Dare” is another personal favorite; here Kimberly sings a heartfelt tune over a diverse array of instruments that include digeridoo, native flutes and exotic percussion. The album closes with an alternate “earth mix” version of this wonderful composition – placing a heavier emphasis on its sacred semblance and trance-like mood.

A blissfully rewarding debut, Awaken Me boasts warmly lush arrangements and richly heartfelt melodies that are conveyed by poetic and down-to-earth lyrics. Many ancient musical elements are deftly woven into these contemporary vocal arrangements of soulful expression and sleek professionalism. There’s a folksy quality to much of the music – as it feels set in the countryside and far removed from busy city life – with Kimberly’s voice and singing style often reminding me of Joni Mitchell’s (especially when she hits the higher notes). A divinely inspirational gift that’s evocative of feminine power, I particularly recommend this album to fans of sacred vocal, adult contemporary and world fusion styles of music! ~Candice Michelle 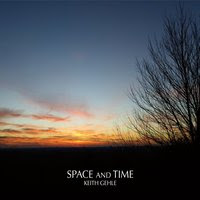 Keith Gehle is a guitarist and composer whose album Space and Time features both acoustic instruments and synthesized elements. Comprised of eleven tracks spanning thirty-eight minutes, the album was mastered by Tom Eaton for Imaginary Road Studios, while all compositions and arrangements were performed by Keith Gehle. Acoustic guitar is the album’s lead instrument throughout, which is intricately woven into the silky fabric of a musical ensemble that variably consists of piano, flute, strings and synths.

The opening piece, “Waiting for the Sun”, signals an approaching dawn, where acoustic guitar is accentuated by hazy tones and textures that lend an overall warm yet spacious effect to the composition. Continuing in this motif is “Lavender Sky”, which opens with beautifully cascading guitar accompanied by piano and synthesizer. Breezy touches of flute further compliment the piece, adding to its distinct seasonal feel, as one can easily imagine delicate autumn leaves dancing in the wind of an early dawn. “The Escaping Light” is a notable piece that opens with solemn strings that are followed by a more melancholic guitar melody, as ever-so-subtle piano and flute provide an added touch of tenderness throughout. One especially intriguing piece is “Tone Poem No. 6 (Space and Time)”, which displays a wonderful interplay of guitar and piano. As if one instrument represents space and the other represents time, the guitar follows the piano lead like that of a dancing couple, while they become increasingly surrounded by sparkling textures and suspended strings. “Cooper’s Creek” is another particular highlight that begins with the gentle sounds of flowing water. It is soon followed by a notably warm and earthy guitar melody, making for a composition that feels intimately connected to nature while nestled somewhere between evening and dawn. Perhaps saving the best for last, “Tone Poem No. 2 (Stars of the Desert Sky)” makes for a perfect conclusion and is easily my favorite piece on the album. Here, a hazily atmospheric ensemble of instruments alludes to a starlit sky, which is conveyed by an ethereal enmeshment of flute, strings and a slightly poignant guitar melody.

One thing I especially appreciate about this album is how the guitars (which were built by Kent Everett) emit a beautiful, velvety tone, which is further enhanced by the warmly-light soundscapes of the arrangements. Although melodically moving in nature, there is a particular emphasis on mood and atmosphere throughout, which Keith has perfectly captured by mostly taking a subtle and perfectly understated approach. A simplistically lovely and peaceful album, Space and Time is like a welcome breath of fresh air that is sure to appeal to many fans of new age instrumental and acoustic guitar ensemble music. ~Candice Michelle

For more information please visit the artist's website. This album is also available at Amazon and CD Baby. 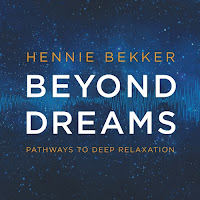 Hennie Bekker is an award-winning and multi-platinum Canadian composer with an extensive musical background. On Beyond Dreams (subtitled Pathways To Deep Relaxation) he infuses electronic soundscapes with subtly melodic structures led by gently rhythmic patterns. Comprised of six tracks spanning a total of sixty minutes, each composition segues seamlessly into the next, creating an experience that is both actively engaging yet deeply relaxing, and overall intended to elicit altered conscious states.

Right from the opening track, titled “Self Connect”, I immediately noticed the multi-layered range of chords conveyed by a warm, analog sound. Melodic notes and gentle plucks move slowly across a low drone – creating a liquid, enveloping sound that feels simultaneously anchored yet floating. Easing right into “Floating to Forever”, this piece is a bit more active and melodic with beautiful chord progressions that seem to gradually climb up and down a ladder of multi-layered sounds. A lead piano melody gently begins to take foreground towards the end of the piece, which then continues on “Letting Go”. Here, a repeating minor-key piano riff glides upon a bed of chords in a constant fluid motion, like that of observing the ocean’s tides or billowing clouds passing across the sky. Clocking in at almost thirteen-and-a-half minutes, “The Calm” enters without pause, as sparkling bell-tones and beautifully bright, ringing percussive elements paint images of being in a majestic crystal chamber. Seguing seamlessly into “Quiescence”, this enthralling piece takes things down just a notch, as velvety notes are suspended over extended drones led by a rhythmic pulse. The title piece, “Beyond Dreams”, takes us into the final stretch of the journey with its icy textures and bell-tones engulfed by a wind-tunnel effect. Bathed in a mystical aura, the composition seems to invoke the presence of angels –not cute little cherubs – but rather that of mysterious, otherworldly beings.

Sitting equally comfortably in both the new age healing and ambient-space music genres, Beyond Dreams is nothing short of a top-notch album by a highly accomplished professional in the field. The three-dimensional compositions herein perfectly capture the essence of the dream world, which is associated with the mysterious, nocturnal and spiritual. Moving in a constantly forward yet rotating motion, it’s like watching the earth from space spinning on its axis as it makes its trek around the sun. As someone with an extensive background in the spa industry, Beyond Dreams gets top billing as an essential relaxation album – and is arguably among the best of its kind! ~Candice Michelle

Listen in your player